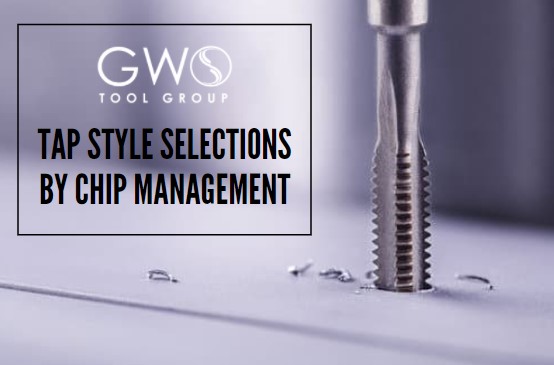 Selecting a tap to avoid breaking and chipping is primarily dependent on the application. You need to decide the best way to handle the chips produced during the tapping operation by selecting one of four styles, Hand (straight flutes), Spiral Point, Spiral Flute, or Form Tap.

Hand (straight flutes) Taps, “store” the chips produced within its flutes making it a candidate for blind hole tapping. Although they are used by machines, it gets its name from being the first style of tap used at the beginning of time when most tapping was done by hand. The deeper you tap the more chips accumulate in the flutes. Once the flutes are full, any further tapping will cause the tap to break due to chip packing. The rule of thumb for tap depth using a 4 fluted hand tap is 1 1/2 times the tap diameter. Because it’s a rule of thumb, this can be adjusted depending on the tap size. A larger size tap may be able to be pushed a little deeper. If you need to produce a thread a little deeper than 1 1/2 diameters deep, you may consider a tap with less than the standard number of flutes. A tap of the same size with fewer flutes, for example, 3 vs. the standard 4, has more chip space and can make the difference of success and failure. 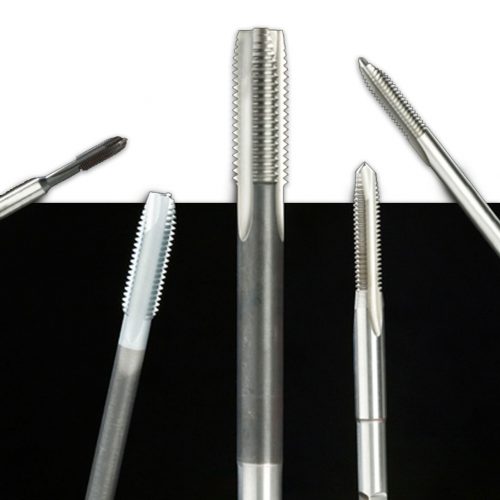 Spiral Pointed Taps, “push” the chips produced ahead of the tap, making it the ideal candidate for through hole tapping. This type of tap normally has one or two less flutes than a hand tap of the same size. Each flute is made up of a straight flute with a helical flute ground into it at the front end of the tap. It’s the helical flute that pushes the chip in a forward direction thus no chips are stored in the straight flute. The straight flute carries and distributes the lubricant. Because the straight flutes are not required to store chips, the core or cross-section beneath the flutes is significantly larger than that of a hand tap, increasing its torsional strength. By pushing chips ahead of the tap, you get benefits over the use of a hand tap of, no chip packing, increased lubricant to the cutting edge, stronger construction and you can run it at faster speeds (30% to 40% over that of a hand tap). All these benefits result in a higher production rate. The only caution I have is that a spiral pointed tap should be run deep enough such that the tap exits the hole by at least 1 thread or revolution beyond the helical flute length. This ensures the last chip is clipped free from the part and will eliminate the possibility of running over it on reversal and cause chipping on the cutting edges.

Spiral Fluted Taps, “pull” the chips produced up and out of the hole like a drill. They are ideally used for blind holes. They also work great when bridging a gap inside of a hole such as a keyway or cross-hole. The flutes, like that of a drill, have a constant helix that spirals around the tap. A tap with a 18° to 30° helix angle is commonly called a slow spiral, and a 45° to 52° helix angle is called a fast spiral. Normally, the more ductile the material, the higher the spiral. Because the flute design yields a smaller cross-section, along with a continuous chip contained within the flutes, they should be run 25% to 30% slower speeds than that of a hand tap. 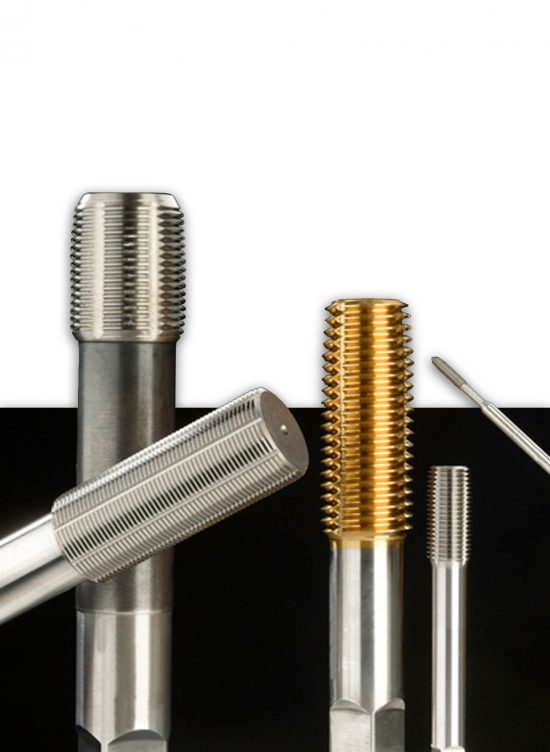 Tru-Flo Forming Taps, “Chipless”, form the internal part thread by extrusion like producing external threads by rolling. These types of taps are fluteless except for a lubricating groove (on sizes #6MS and larger). The thread form on the tap is made up of a forming lobe on each thread. This style of tap does not have a chamfer like the cutting taps above, they have what is called an Entry Taper. The Entry Taper is a section of tapered full threads that progressively increase in diameter and are available in plug and bottoming lengths. It is the lobed threads in the entry taper length that does the forming. The benefits of this type of tap design are, better part finish, faster tapping speeds (rule of thumb, twice the speed), no chips which simplifies tapping of blind bottoming holes, stronger thread form, and Improved tap life. They require a different (larger) tap drill size than what is used for a cutting tap, information on this can be found in our online literature. Tru-Flo Forming Taps work well in soft ductile materials such as low carbon steels, stainless steels, leaded steels, aluminum, copper, etc. These materials have the ability to be formed. Rule of thumb, material properties should have a hardness less than 30Rc, an elongation (the ability to stretch) of 12% or greater, and a tensile strength (ability to produce somewhat of a continuous chip) less than 71k PSI.

The resulting thread form in the part is slightly different than that of a cutting tap. When using a cutting tap, the crest at the minor diameter of the part is produced by the tap drill and is basically a flat. For the Tru-Flo Forming Tap, the crest on the minor diameter is produced by the tap during the forming process. The resulting crest form is more of a radius with seam or discontinuity.

As stated in the beginning, tap style selection, based on dealing with the chips, is the first step towards success. Once this is done, then other appropriate design features can be added or adjusted contributing to that success. Give us a call at 800-497-8665 or email Sales@GWSToolGroup.com with your application requirements and together we can design a tap that will work for you!