Engage Yourself With Gages & Gaging 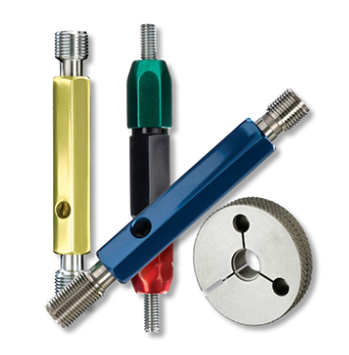 Now that you successfully produced a threaded part, how do you know if it’s too large, or too small? Just because the bolt screws into a threaded hole or a nut screws on to a threaded stud, doesn’t mean it’s in the specification. What confidence do you have that when your customer receives your part that their part will assemble with it?

This is where gages come into play. Gages determine if what was produced is somewhere between the required maximum and minimum size envelope. The use of limit type gages is the simplest way to accomplish this. Limit type gages do not measure anything, they compare what you produce to a known piece of size. For straight threads, limit type gages consist of two gages, one representing the maximum limit and the other the minimum limit of the thread being produced.

Limit type gages do not actually evaluate the pitch diameter only, they evaluate the functional size of the thread, that is the maximum and minimum envelope or thread groove. This includes not only the pitch diameter, but the major diameter (in the case of an internal thread), minor diameter (in the case of an external thread), and the functional effects of the thread pitch, flank angle, and other thread elements. The use of limit type gages checking the functional size will be guaranteed that parts will assemble and be interchangeable.

The functional versus measured size is illustrated in Figure 2 using a plain diameter pin. This is less complicated than showing it with a thread, but the concept is the same. In this example, the pin measures .498, so you would think a ring gage measuring .500 would pass over it. But in this case, it will not, due to the bend increasing the functional size to .502.

In addition, to limit type gages there are other types. Attribute/indicator gages, they measure individual thread elements, singularly or in combination, and are used for reasons other than functional size verification. One type of thread that requires these other gages, in combination with the GO limit type gage, is the UNJ thread. If you are interested in more information on the various gages and their use, reference the ASME (American Society of Mechanical Engineers) Standards Publication, Section B1.3. But for most applications, the limit type GO / NOGO gages are the simplest and most economical.

The NOTGO gage must not screw onto or into the threaded part more than 3 turns for inch threads (ASME B1.2) and 2 turns for metric threads (ASME B1.16M) unless otherwise specified or the thread length is only a few threads long. In the case of an internal thread, this shows that the thread is no larger than the maximum limit, and for an external thread, it shows that thread is no smaller than the minimum limit.

The reason the NOTGO gage is allowed to engage the thread is due to the fact that many internal and external threaded parts have some type of chamfer, and on an externally threaded part, the first or partial thread may be undersize due to the threading process, additionally, the first thread on the gage itself will ware from repeated attempts of gaging.

So, if the GO goes and the NOTGO does not go then the part is good being between the largest and smallest envelope of size.

Due to gage manufacturing tolerances, it is possible that one of two GO gages for the same size thread, will go into or onto a part and the other will not. The ASME B1.2 and B1.16M gage standards recognize this and as long as both gages are in calibration, the part should be considered good.

By choosing GWS Tool Group’s thread plug and ring gages, you ensure that your part is within specified limits, saving time and money, and is an example of our commitment to providing threaded solutions. For more information on taps, dies, gages or threadmill tools available, please email our sales team or call 877-GWS-TOOL (877-497-8665).