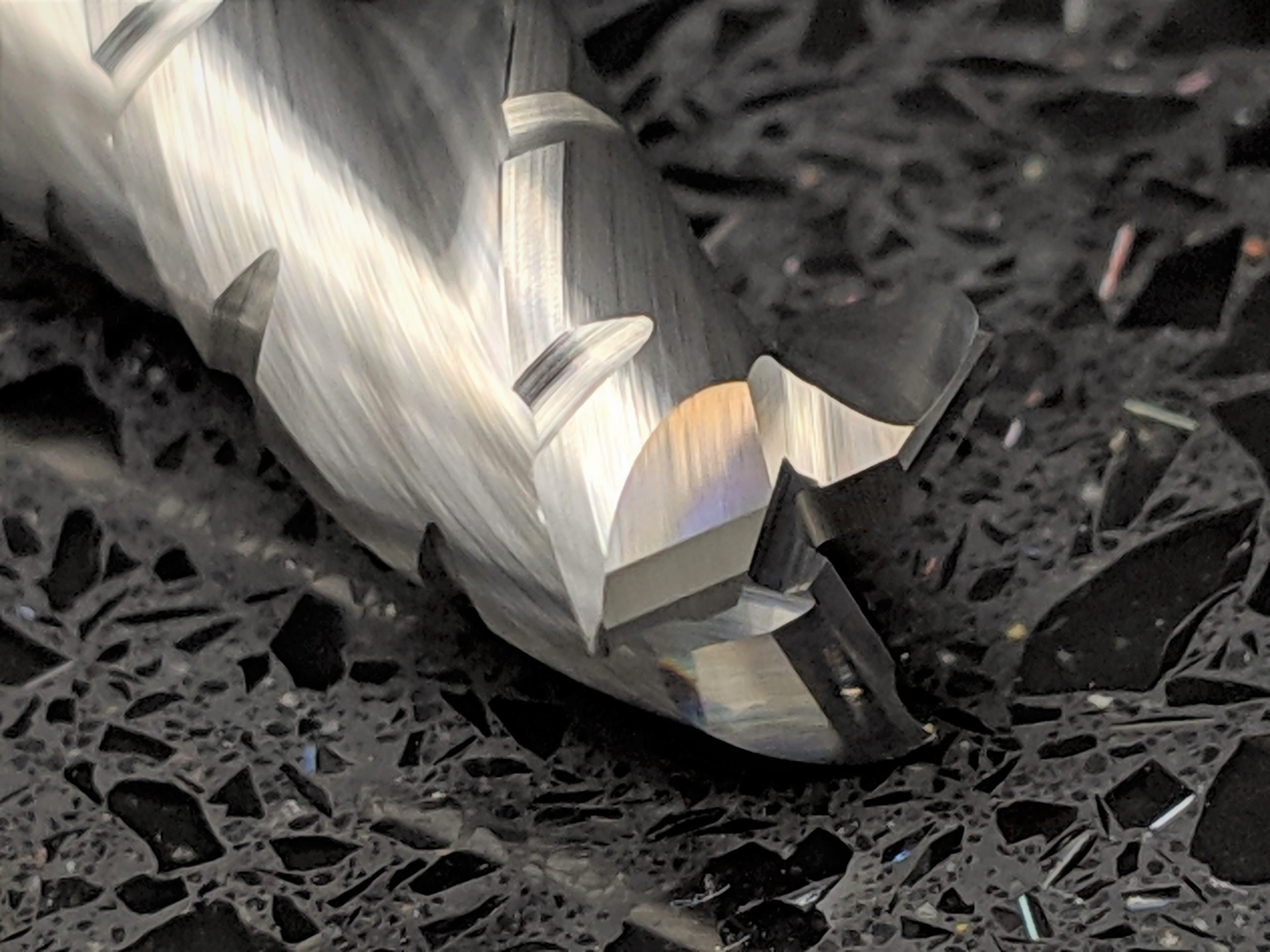 The company produces components for a variety of manufacturing industries, including the Food and Beverage Industry, Aerospace, Aviation, Marine and aftermarket automotive industry. All of these industries call for the use of various materials. A good portion of their aftermarket Automotive parts are made from various grades of aluminum.

The cuts made on these work pieces involve perimeter ramping, and helical ramping into the material and then deep pocketing. The trick to doing that with aluminum is the need to remove chips effectively and maximize tool life while still maintaining acceptable cycle times. Acceptable cycle times mean not only machining fast, but also entering the part equally as fast without reducing feed rates or altering toolpath to compensate for end mills incapable of aggressive part entry.

About 15 years ago, the company was working with a competitor’s brand endmill for their aluminum applications on a vertical machining center. They ran those tools as fast and hard as they could while maintaining finish and tolerances. A GWS sales engineer paid a visit and left behind a standard off-the-shelf-tool for them to try. That’s when the company’s programmer found out that a good quality tool can increase productivity and finishes dramatically. Finishes were much better with the very first run. Cycle times were reduced by close to 20%.

Today, Breiner Machine uses the latest version aluminum cutting tool in the GWS lineup, the Alumigator. One of the things that Jason Breiner, President of Breiner Machine, has found unique on the Alumigator line is their outstanding center cut gash design. “The ramping is insane, I’ve never seen anything so aggressive,” he said. “The chips eject with no problem even when ramping at extremely steep angles.” Jason says in his experience, that usually packs up any other endmill. The best I can usually ramp in at is 10 degrees with other brands. I can more than double the ramp angle with the Alumigator. The ramp angles achieved with this tool exceed the capabilities of any other endmill he has tried.

With their old tool, Breiner Machine was only capable of 250 IPM when pocketing in aluminum via ramping high-speed machining for turbo mounts for diesel engines. With the 1025 Alumigator Series they were able to achieve 450 IPM. “Few tools can plunge and ramp like the Alumigator can,” Jason said.

The reasons for this outstanding chip flow can be attributed to the design of the tool. The tapered core of the endmill adds stability and a carefully designed gash at the tip maximizes chip clearance while still maintaining rigidity during machining.

Breiner Machine recently acquired a brand-new Kitamura vertical machining center. This only gave the shop more reason to take the GWS tooling they’ve been using and push it harder, to test not only the tool’s capability, but the machines. They recently tried a 1010 Alumigator to make airboat propeller hubs, and they’ve far exceeded the initial recommended feeds/speeds which were 300 IPM and 10,000 RPM. The roughing operation consists of a 30-degree ramp angle going 1.5″ deep with no speed reduction. The spindle load meter on the machine has yet to register.

The impact to the bottom line has been huge. Aside from the performance of the GWS tool, profitability is way up. While cycle times are dropping, yield is good. Tool changes have been eliminated by using the same tool for roughing and finishing operations; tool life has been maximized; and the scrap rate has dropped since parts are no longer messed up by chip-packed tools. Those are just a few of the advantages Breiner Machine has seen so far with tooling from GWS.

Jason is known to experiment. So, he’s familiar with many of the “top tier” brands in the market and what their competitive tool offers. But GWS has proven to have great cost performance (good price point). “It doesn’t make sense to use a tool at double the price if it doesn’t yield comparable results,” Jason said.

What’s next for Breiner Machine? Jason has only been using standard off-the-shelf items and has reached milestones he’s never thought possible. Just imagine if he decided to tap into GWS’s custom capabilities (something they are known for)? The sky is the limit.

So, if you’re machining aluminum, take deep cuts in the parts, not your profits. Contact us anytime. We’ll be glad to put an Alumigator or any of our fine tools to work for you.

And be on the lookout for the newest addition to our aluminum offerings, our the GWS KA5. Watch it work.